Call of Duty: Mobile is among the most popular games with an increasing number of people playing it owing to the nationwide lockdowns across the globe. The developers have been releasing regular updates for the game and now, a new event called Gold Rush. It is the first in-game event tied to a seasonal theme and players have to collect gold to exchange it for unique rewards. The Gold Rush event is playable in Battle Royale or Kill Confirmed game modes.

As stated on Call of Duty: Mobile’s Reddit account, Gold Rush started on May 8 and will continue till May 21. It is only available in Kill Confirmed and Battle Royale game modes. It is based on a western theme that goes in line with the latest season titled, Once Upon a Time in Rust. The latest season brings a lot of new additions to the game, one of which is the Gold Rush event.

What is Gold Rush?

The Gold Rush event in Call of Duty: Mobile lets players exchange gold for unique rewards in the Events section of the main menu. In Battle Royale mode, players can earn gold by finding and destroying barrels that have treasure maps leading to gold. In Kill Confirmed more, killing enemies and picking up dog tags to confirm kills gives players 1 gold bar. Even if your teammate collects a dog tag for an enemy you killed, you get 1 gold bar. Players can then visit the Events section to exchange their gold for rewards like weapon skins and class camos. Some of these rewards include ‘Flowing Bronze series of BR class camos’, ‘LK24 – Flowing Bronze’, and ‘M4LMG – Moonstone (Epic reward)’.

Call of Duty: Mobile also introduced the Frontier Justice lucky draw that allows players to get their hands on a new weapon called Outlaw – High Noon, as well as a new character named Seraph – Tombstone. There is also a new weapon set which, if complete, gives players an XP bonus as well as a Gold Rush event bonus. Another draw was added to the game called Dust to Dust that gives players a chance to unlock the RUS-79U – Dustkicker weapon and a new character called Scarlett.

Along with the Gold Rush event details, the developers also shared a roadmap for Season 6 and the several new additions that will come to the game. Some of these updates have already been made available while some are yet to come. Notably, some of these dates are tentative. 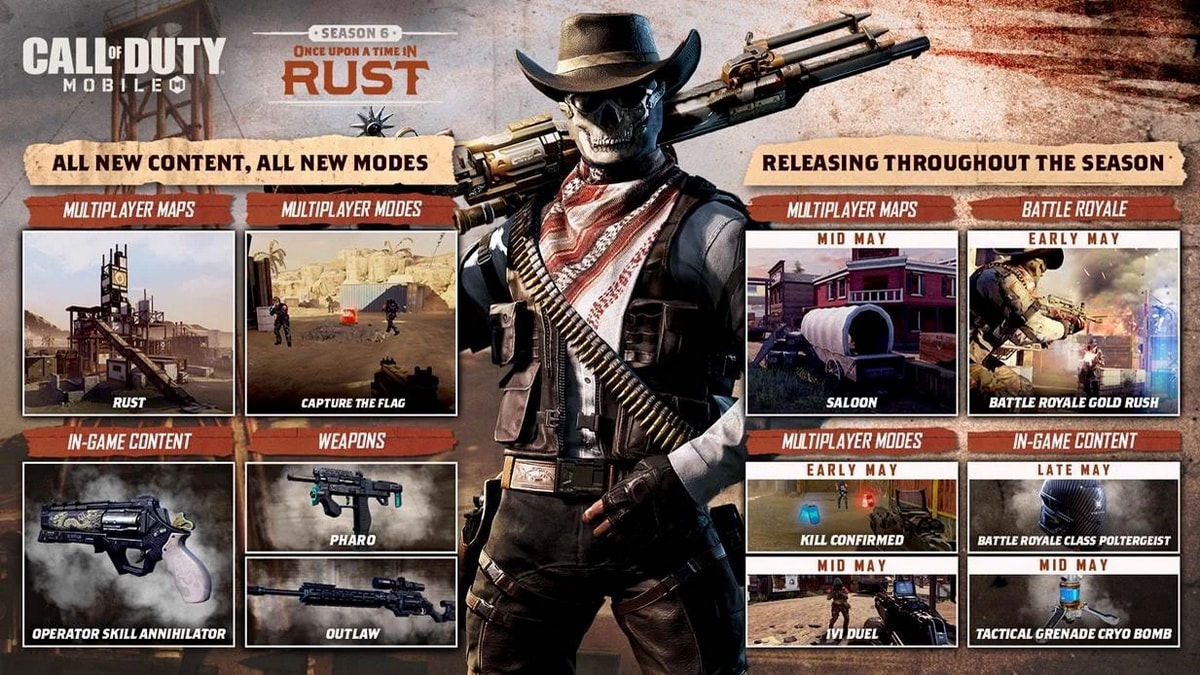 Several features are yet to come in Season 6

Call of Duty: Mobile has also teased a new map area that will come in June. The developers have stated that they are working on the progression system in the game that will bring a “variety of options for adding additional progression options.” There will also be more challenges in the near future and in mid-May, there will be more challenges for the Cordite weapon, in addition to the ones available for Locus and Pharo.

The developers also shared a bug report in the Reddit post asking players to share a video or clip or any kind of evidence to show reported problems like audio-based issues, black screen issues, and World Championship issues.

You can also read about other updates in Season 6 – Once Upon a Time in Rust – here.

iPhone 12 Will Cost More Than iPhone 11; Apple May Not Meet Its 80 Million Units Shipments Target: Report